I first became interested in art at a young age when I came across a book of modern art.  I was told how amazing the art was supposed to be–some of the best of our age.  I was thoroughly unimpressed and thought that with enough practice, I’d soon be better.  After that, I became fanatical about practicing, going over and over any tips I picked up on TV, from books, or the rare art lesson at school. 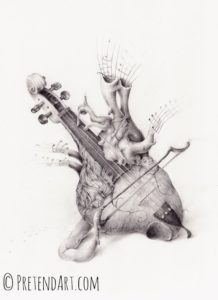 My interest was primarily realism done in pencil.  When I heard that the best way to learn how to draw something was from the inside out, I took it literally and began studying anatomy in all forms.

At sixteen, my art to a drastic turn overnight.  I was no longer interested in realism, instead my drawing became filled with surreal and abstract landscapes.  I continued in that style until I was eighteen and began to take an interest in adding color to my art.  I returned to my roots in realism, though now often coupled with surreal and abstract flairs.  At some point, I began making connections between the anatomy I’d studied for years and things I was seeing in nature.  I wondered if I’d be able to combine them, and after that I realized I could combine any subjects together if I tried.

My interests are still mainly in anatomy and subject melding, though I also enjoy being able to do pet portraits.  I’ve also been truly blessed over the years with being an art teacher and tutor, sharing with children and adults all the tips I’ve picked up over the years and watching as they come into their own as artists. 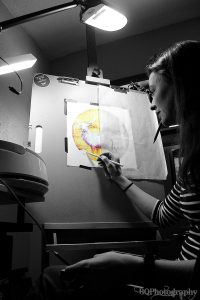 Special thanks to BQPhotography for the photograph of me in the studio!