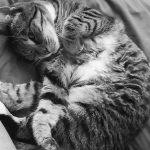 Sometimes I get a request for a pet portrait where I’m not able to get the best reference photo.  Often it’s for a beloved pet who has since passed, though sometimes it’s for a surprise gift where a good photo can’t be gotten without the owner finding out.

Recently, I was asked to do a portrait of a beautiful cat who had passed away.

I received a handful of photos of the cat.

Unfortunately her colors weren’t very clear in most of the photos, so I knew the most effective approach would be a black and white drawing.

The first photos I always eliminate are pictures that are blurry or where the pet is too far away.

With portraits, pet or human, the focal point is generally going to be the eyes.  With that in mind, I eliminated the pictures where her eyes weren’t in clear view.

From there I filtered out one where she was looking sassy [top left].  The top right picture where the lighting wasn’t great on her face.

Between the two bottom pictures, the lines on the left one weren’t quite as crisp.  The bottom right picture had a clear view of her eyes and a wonderful contrast.

The only problem was that in the photo, one of her ears was cropped off, and the other was facing sideways.

Going through some of the other photos of her, there were a couple images where the picture was snapped at a similar enough angle that I was able to edit in both her ears.

Even with high quality reference photos, I still like having multiple photos of the pet, especially when they have markings, to help me better determine what the markings look like and what might be caused by the lighting, dirt, etc.

After determining what my main reference photo was going to be, I started planning the best way to approach this portrait. Since the right side of the picture is in shadow and that ear was facing back, I decided to really play up the shadows and contrast, wanting to blend her into a dark background to give the illusion that she was emerging from shadows.  I wanted the main focus of this picture to be on her beautiful eyes, so I needed to keep that the highest point of contrast.  Even though in the photo the patch of white on her chest is just as bright as the highlight in her eyes, I wanted to tone that down so it wouldn’t draw the viewer away from her face.  I also decided that I’d make her stripes on her chest less dark than I’d make the markings around her face for the same reason even though you can see in the reference photo that they’re equally as dark.

After getting and idea of what I wanted to accomplish, I got to work.  In portraits, I like putting in the eyes first because they have the darkest value (pupil) and the lightest (highlight), which helps me keep my values in mind as I progress. 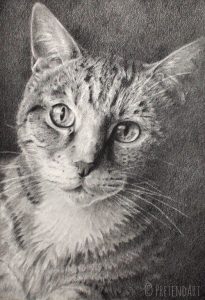 After a few days of hard work, I’ve drawn a picture I’m truly proud of.

I’m always so touched when people entrust me with memorializing their pets.  I hope I can continue doing this kind of work.